Additionally, on October 5 and 6, we will have a booth for Remote TestKit at STARWEST 2016 Expo, to be held October 2-7 in Anaheim, California. STARWEST 2016 is an event for testing and QA professionals for mobile app and mobile websites, holding over 100 talk and tutorial sessions, and displaying all kinds of tools and services for testing. We also had a booth at this expo last year. Visitors to our booth will be invited to try out the newest mobile devices, starting with iPhone 7 and iPhone 7 Plus, as well as viewing our efforts to improve smartphone app and site testing quality, and increase work efficiency through automatic testing using Remote TestKit.

1.Regarding iOS 10, the newest version of iOS 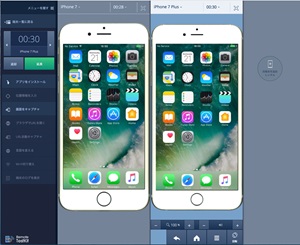 – Exhibition Overview:
Visitors can try audio testing and automation testing, and experience Remote TestKit on the newest Android 7 devices and iPhone 7 and iPhone 7 Plus with iOS 10, just released mid-September. Experience the fastest screen refresh rate (*3) for remote testing as well as direct smartphone use utilizing keyboard input. We will also have a display connected to Xcode (*4), a tool which allows for efficient app development for iPhone.
Further details on the STARWEST 2016 Expo can be found at:
https://starwest.techwell.com/expo/about-expo

(*4) An integrated development environment developed by Apple for app development for iOS. Users can develop software for Mac OS and iOS (iPhone/iPad/iPod) as well as editing source codes and managing the files for their projects.

* The above company, service, and product names may be trademarks or registered trademarks of their respective companies.