TOKYO,Jan.24,2017―NTT Resonant, Inc. announced on January 24 that its cloud-based testing service Remote TestKit (*) Enterprise edition has been adopted by U.S. cybersecurity company Lookout, Inc. It has also posted an interview with Lookout conducted after several months’ use of the service. For more information, please view the following interview:

2.Lookout’s Use of Remote TestKit

Lookout is a cybersecurity company that makes it possible for tens of millions of individuals, enterprises and government agencies to be both mobile and secure. Powered by a dataset of virtually all the mobile code in the world — 30 million apps and counting — the Lookout Security Cloud can identify connections that would otherwise go unseen and predict and stop mobile attacks before they do harm. The world’s leading mobile network operators, including AT&T, Deutsche Telekom, EE, KDDI, Orange, Sprint, T-Mobile and Telstra, have selected Lookout as its preferred mobile security solution. Lookout is also partnered with such enterprise leaders as AirWatch, Ingram Micro, Microsoft and MobileIron. Headquartered in San Francisco, Lookout has offices in Amsterdam, Boston, London, Sydney, Tokyo, Toronto and Washington, D.C.

(2)About Use of Remote TestKit

The Remote TestKit Enterprise edition has been adopted for use in the North American and Tokyo offices, and software engineers across the world in locations such as Ireland, India, and Ukraine are using the service. 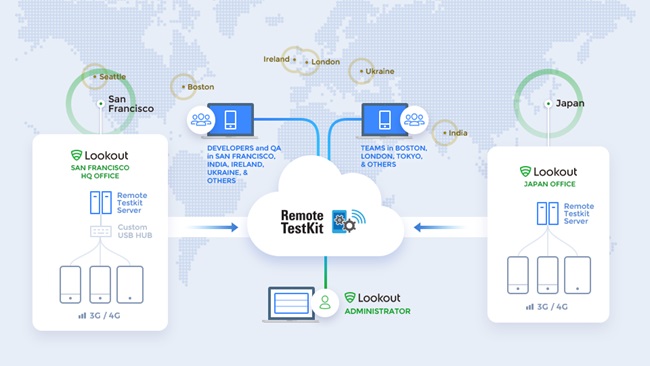 (*) About Remote TestKit (https://appkitbox.com/en/testkit/)
Remote TestKit is a developer support service that allows cloud-based testing for smartphone apps and mobile versions of websites. Users don’t need to purchase actual devices. Instead, they can perform tests on over 500 types of smartphones and tablets using our cloud-based service. There is also an Auto-Test functionality to automatically run a test scenario on multiple devices as well as other functions for developers to lessen the burden of device testing.