RagnaQuest allows you to immerse yourself in a charming Norse tale full of adventure, comedy, and Valkyries. Fight alongside hundreds of gods and mythical heroes in real-time battles, and stand up against fate to save the gods, and the world. 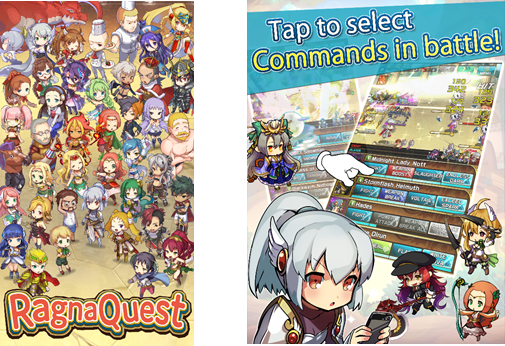 Originally released in Japan to an overwhelming success of 6 million downloads, RagnaQuest is now available for download from App Store and Google Play.

– Explore A Silly And Serious World!

You’ve never seen the gods like this before. Explore a comedic and dramatic story based on mythology from around the world, with hundreds of characters to encounter. Build your Party and lead them to victory.

(1) Easy to pick up, hard to put down. Give Commands to your Units and conquer challenging foes.
(2) Get to know your favorite myths in whole new light. Gods and mythical heroes appear as charming and unforgettable characters.
(3) It’s not all cuteness, though. Experience a sprawling tale of destiny and heroism that spans across Realms.

Battles play out in real time. Change your Commands on the fly to fit the situation. Powerful magic, flashy finishers, healing spells — everything you love from turn-based RPGs in an easy-to-understand battle system. Many Units have their own unique Commands. Smite your foes with godly abilities like Gungnir, Star Blaze, and Tri-Feather.

In the land of Asgard where the gods live, the most popular job of all is the Valkyrie – Warmaidens who serve under Allfather Odin’s direct command. As a brand-new Valkyrie, you’ve come to Valhalla to accept your very first mission. Explore the wide world in the boughs of the World Tree Yggdrasil as you fight alongside familiar Norse gods like Freyja, Thor and Loki to stop the Twilight of the Gods, Ragnarok, in this sprawling fantasy adventure. Take up your blade and stand against Fate to save the gods and the world.

This game is designed to be compatible with devices using iOS 8.0 and above.

1) Some devices may not be able to run the app. Any device not using iOS 8.0 or above will not be supported. Thank you for your understanding.
2) This game offers optional in-app purchases to further improve your gameplay experience.
3) iPhone/iPad and App Store are trademarks of Apple Inc.

This game is designed to be compatible with devices using Android 4.4 and above.

1) Certain devices may not be able to run this app. Any device not using Android 4.4 or above will not be supported. Thank you for your understanding.
2) This game offers optional in-app purchases to further improve your gameplay experience.
3) Android and Google Play are trademarks of Google Inc.

NTT Resonant is a wholly owned subsidiary of the NTT Group, which is one of the world’s largest ICT (information and communications technology) companies. NTT Resonant had its genesis in the development team that pioneered Internet search in Japan. Building on its core business operating the internet portal site “goo,”  NTT Resonant has developed various Internet services and has leveraged the company’s know-how and new technologies to provide solutions for corporate customers.